Last weekend, Marcia and I spent the weekend in Chelsea, at the ABA Antiquarian Fair. Above is a panoramic photo of the hall at the end of Thursday evening (I wanted to capture the hall without the dealers – an exhausted Marianne was just a bonus)! Click on the panorama to see it in all its glory.

As ever, the fair was full of some fabulous books, manuscripts and ephemeral items from around the world. Just behind me on the stage was an array of medieval manuscripts and incunabula. Ranging from a few pounds, to many tens of thousands, there was truly something for everyone. Even for Marcia – she picked up a small artists note book full of beautiful illustrations by a Victorian doctor, who caught 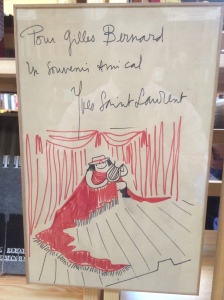 typhus in the last major outbreak in London, whilst assisting the sick.

Another lovely item was the original sketch by Yves Saint Laurent – presented by one of our French colleagues. 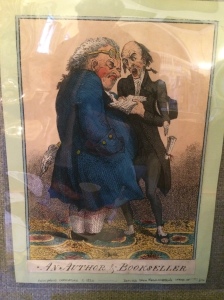 On Pat Marrin’s stand, I found this lovely little picture of a bookseller. I am sure I recognize him from our dinner on Friday night (wonderfully arranged by Giles from Worlds End Books). Which reminds me – did anyone ever work out where the missing five hours went after the dinner?

And so, Chelsea is over for another year. Many thanks to Marianne, Ped (relaxing below at the end of the fair), Camilla (hiding in the video of the fair below) and of course, our wonderful ring master Graham York. Ever onwards to the next fair – for many this is Boston, but for me it will be the PBFA Kensington Christmas Fair.

2 thoughts on “Made in Chelsea”